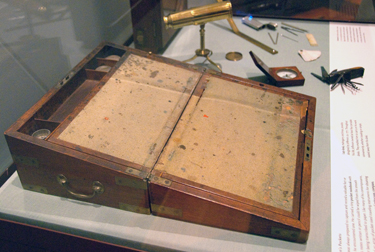 English writing boxes of the late 18th and early 19th century served as a portable desk or “laptop” both at home and while traveling. These desks allowed the user to easily create, manage, and store documents. The desk  typically opened along a diagonal joint revealing a sloped writing surface. The writing surface generally was covered in Baize and featured small compartments for pens and ink.

Beneath the writing surface, the writing box provided for storage of small items of importance such as sealing wax, sanders, and other similar items. In the side of the lower portion of the box is a small drawer designed for paper and other necessary supplies.

Versions from the 18th century typically had a classic bail handle that protruded from the face of the drawer. Early 19th Century boxes featured recessed or flush handles while maintaining the same basic design. In some situations, brass straps were inlaid around the corners to provide additional strength for those who traveled under more rigorous conditions, such as those in the military.

The English style writing box offered by Daniel is based upon an original from the late 1790s and is built using cherry. Although originals of this piece were often made from mahogany, current sources of mahogany lack the color and tight grained character found in original pieces, which is why Daniel prefers the qualities of cherry available today. While some styles from the late 1790s feature inlaid brass straps, the English style writing box offered by Daniel does not offer this feature, as this box is designed for more stationary use and is not likely to be subjected to the physical abuse of travel by wagon or horseback.

For pricing of the English -Style writing desk, please see our prices page. 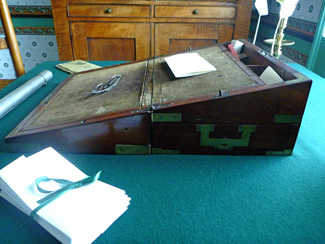